A six-year-old girl was hospitalised with ethanol poisoning after drinking an entire 50ml bottle of hand sanitiser, prompting a dire warning to parents.

The girl had been playing on her own at a home in New South Wales before telling her carer she felt dizzy and was struggling with slurred speech.

Her older sister said her breath smelled like hand sanitiser, prompting her to be rushed to hospital where she vomited twice, which ‘smelled sweet’.

Horrified doctors discovered she had a blood alcohol reading of 0.19 per cent due to the ethanol in the sanitiser, making her four-times over the NSW drink drive limit. 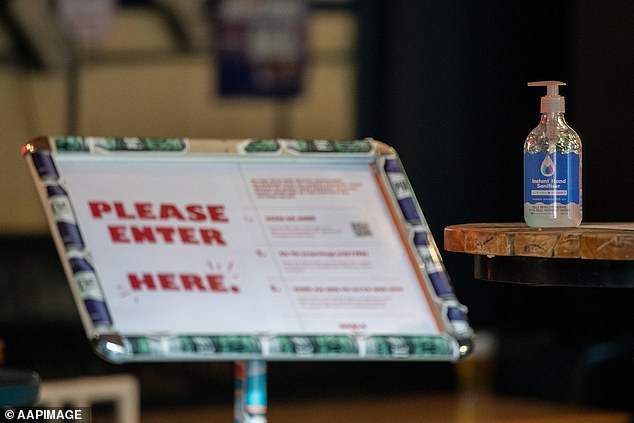 Most hand sanitisers in Australia have an ethanol content between 62 and 70 per cent. Pictured: Hand sanitiser at a bar in Darlinghurst

The girl was struggling to breathe, her heart rate was slow and her response levels were low, forcing doctors to intubate her.

‘Thorough history obtained from the parent confirmed that there were no alcoholic drinks in the house,’ the hospital report read.

‘Once awake, the patient disclosed that she had often tasted the hand sanitiser over the last few months and had done so the previous night.

‘She was unable to report the volume that she consumed but the NSW Poisons Information Centre estimated it to be in the region of 50ml.

‘She reported liking the smell and taste of the hand sanitiser, which her mother noted had been missing for a few days.’

The girl recovered and was discharged within 24 hours. 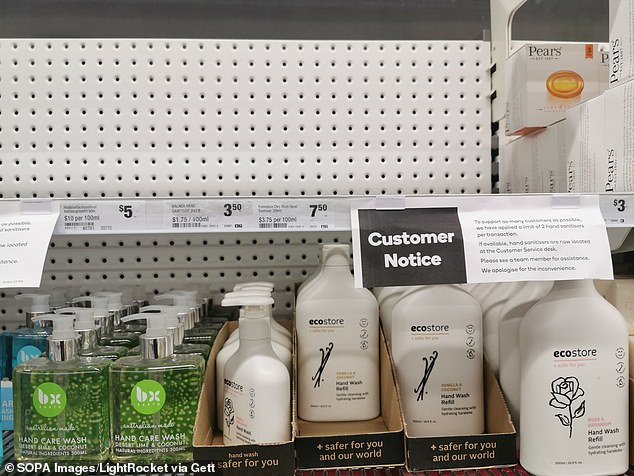 Most hand sanitisers in Australia have an ethanol content between 62 and 70 per cent.

Genevieve Adamo, Senior Specialist in Poisons Information, told Daily Mail Australia there had been more than 1,000 calls about hand sanitisers to the NSW Poisons Information Centre from February to the end of July – mostly regarding children.

‘This is 2.5 times the number of calls received for the same period in 2019,’ she explained.

‘Three-quarters of these have been accidental exposures in children under the age of five.’

Hand sanitiser flew off the shelves at chemists and supermarkets in February and March at the peak of the COVID-19 pandemic.

Health bodies in Australia have repeatedly made clear the importance of washing your hands and carrying hand sanitiser in attempts to promote hygiene during the pandemic.

But its increasing popularity prompted NSW Health to issue a warning to parents and carers regarding the potential dangers of the product around small children. 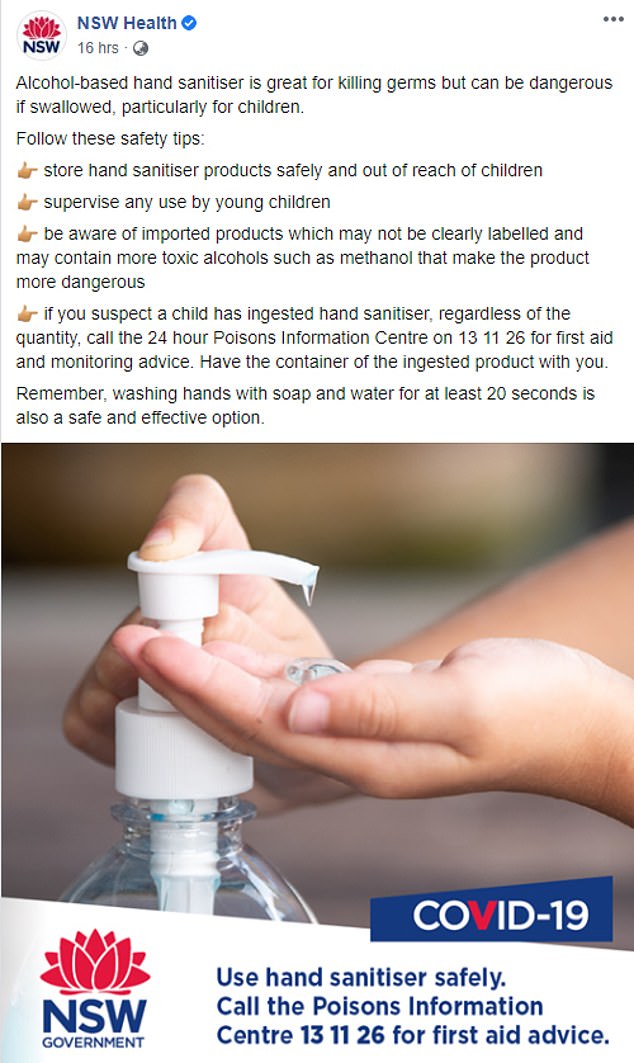 ‘Alcohol-based hand sanitiser is great for killing germs but can be dangerous if swallowed, particularly for children,’ a social media post read.

‘Follow these safety tips: store hand sanitiser products safely and out of reach of children, supervise any use by young children and be aware of imported products which may not be clearly labelled and may contain more toxic alcohols such as methanol that make the product more dangerous.’

The post advised that if there were any concerns that a child had ingested hand sanitiser that the Poisons Information Centre should be called ‘regardless of the quantity’.

‘Remember, washing hands with soap and water for at least 20 seconds is also a safe and effective option,’ the post read.