Jeffrey Epstein’s final girlfriend knows a decade of his secrets and was obsessed with snooping on him during their time together, DailyMail.com can disclose.

Karyna Shuliak was the last person outside prison to speak to him, phoning her in her native Belarus the day before he hanged himself in his cell. Their relationship was first revealed in March.

Now it can be disclosed that it was twice as long as had been thought – not four or five years but between eight and ten years.

The Belarus-born 30-year-old appears to have spent the time since his death in the United States and – unlike Ghislaine Maxwell, his former girlfriend and alleged procurer who is now awaiting trial on child sex charges – has had no public dealings with the FBI.

She was on his private jet when he landed from Paris at Teterboro Airport, New Jersey, last July and was arrested by the FBI.

DailyMail.com can disclose that her relationship with Epstein, who was 66 when he died, was far deeper than had been appreciated.

Karyna Shuliak is Jeffrey Epstein’s last girlfriend for about a decade and was obsessed with snooping on him, DailyMail.com can reveal. She was the last person outside prison to speak to him, phoning her in her native Belarus the day before he hanged himself in his cell last year They’re pictured together in 2014 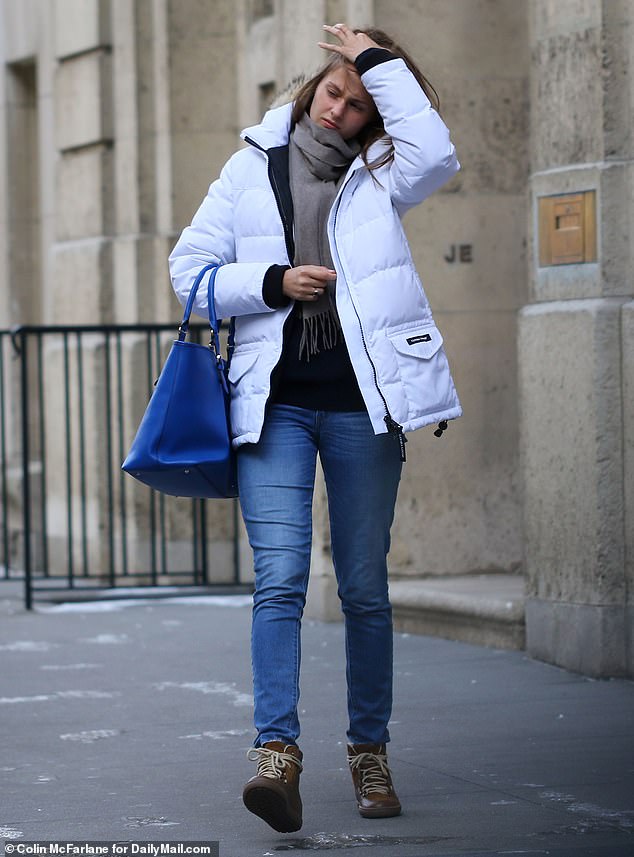 Sources tell DailyMail.com that after Epstein was released from prison in 2010, ‘Everyone turned their back on him…except Karyna who was there until the very last moment’. Shuliak is pictured leaving Epstein’s Manhattan apartment in 2015

Epstein paid for Shuliak’s mother’s expensive medical treatment, and may have helped fund the upscale home where her parents live in Minsk, the largely rundown capital of Belarus.

And her attendance at Columbia University now appears likely to have been paid for by Epstein.

Shuliak originally arrived in the US in 2009 – then aged 20 – and is believed to have come to know the Wall Street financier soon afterwards.

Her importance to pedophile Epstein has emerged from the testimony of a source in their circle who said their association went back a decade, to when he was released from prison in August 2010. 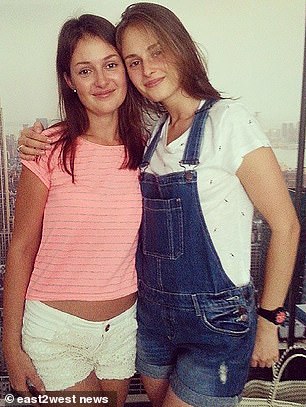 In 2014 Shuliak’s close friend Tanya Pilipyonok (pictured together) was asked if Karyna was married, and replied in the negative

He served just 18 months in prison  – much of it on day release – for a single count of procuring a girl below 18 for prostitution. The lenient sentence was the subject of public outrage.

‘Everyone turned their back on him after prison and renounced him as an anti-Christ,’ said the source.

‘Even his closest friends. No-one stayed with him except Karyna who was there until the very last moment.’

The source added: ‘Karyna was nicknamed ”the inspector” because she was madly jealous over Epstein, and was always investigating who he was in contact with.’

It was previously reported that Shuliak – who traveled with the billionaire to Paris – was not exposed to his sex trafficking activities, but disclosure of her jealousy and investigations of his contacts may cast that into doubt.

Shuliak appears likely to hold American citizenship, or at least a green card, after going through an apparently bogus marriage in 2013 with Jennifer Kalin, Epstein’s longtime associate.

DailyMail.com was told by a source that this was at Epstein’s instigation to enable the Soviet-born woman to remain in the US.

Interestingly, in 2014 close Shuliak friend Tanya Pilipyonok was asked if Karyna was married, and replied in the negative.

Shuliak was seen in a picture with Pilipyonok apparently wearing a wedding ring.

It is unclear if Pilipyonok was aware or unaware at the time that her friend was in a same-sex marriage. She is one of a number of people in ‘introvert’ Shuliak’s circle who have refused to speak about her and her links to Epstein.

The wedding was one of several ‘sham marriages’ linked to Epstein associates and it has been alleged that the device was used to legalize the stays of young women he trafficked into the U.S.

Shuliak’s marriage, which ended in 2019, is not believed to be the subject of any legal action.

The marriage ended while she was still in a relationship with Epstein.

DailyMail.com has reached out to Shuliak’s attorney for comment. 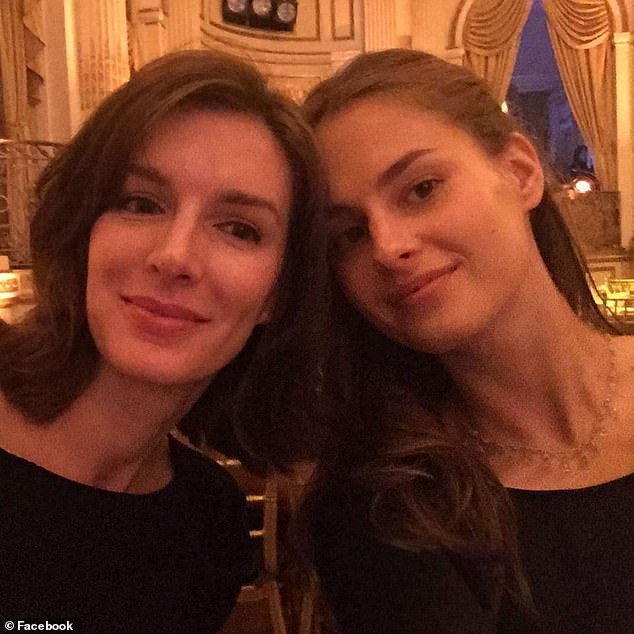 Shuliak (right) appears likely to hold American citizenship, or at least a green card, after going through an apparently bogus marriage in 2013 with Jennifer Kalin (left), Epstein’s longtime associate 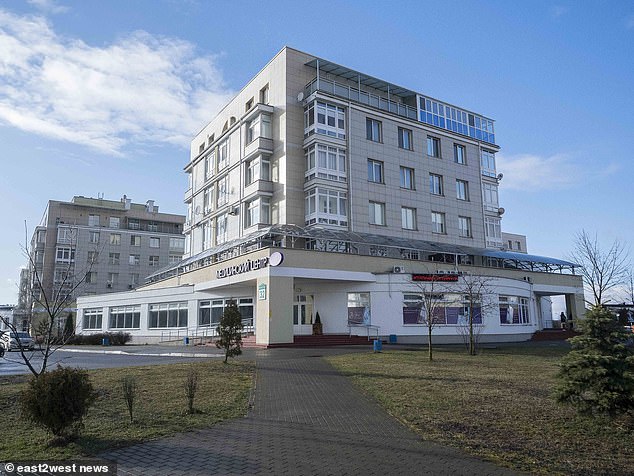 Epstein paid for Shuliak’s mother’s expensive medical treatment, and may have helped fund the upscale home where her parents live in Minsk, the largely rundown capital of Belarus (pictured) 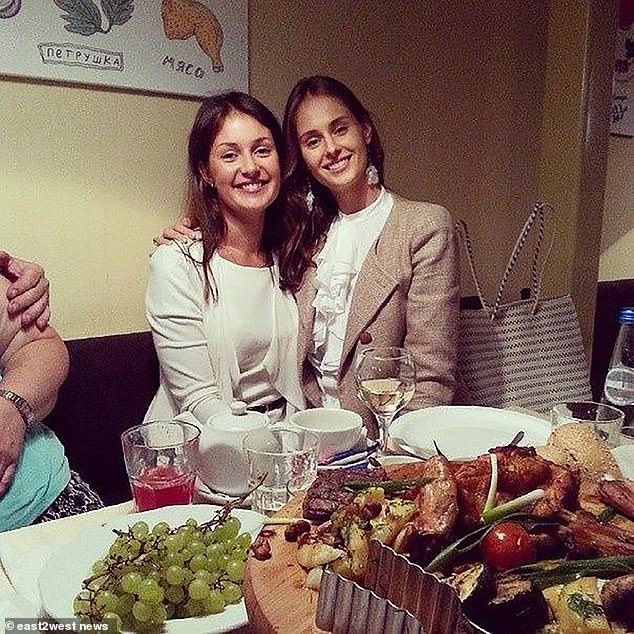 Pilipyonok is one of a number of people in ‘introvert’ Shuliak’s circle who have refused to speak about her and her links to Epstein. The women are pictured together in 2014

After he was found dead in jail, she was ‘depressed’ and her friends were ‘worried’ about her because she was in a ‘very complicated situation,’the source said.

The source said: ‘After dating so long with such a public person, she had no close friends.

‘Probably I am one of the few who knows the situation and who can provide any support – and of course I do this.’

How Jeffrey Epstein arranged sham marriages to keep his women in the U.S.

A previous report by Business Insider said that Epstein arranged at least three marriages for women in his close circle to keep recruiters and friends in America.

One of them was detailed in a lawsuit filed by a woman called ‘Katlyn Doe’ against Epstein’s estate. She does not appear to be Shuliak.

The lawsuit alleges that Doe met Epstein in 2007 when she was 17 and had an eating disorder and a serious medical condition.

Epstein promised to help pay for the series of surgeries she needed but began to sexually abuse her as well, and took her virginity.

The lawsuit states that in 2013 he told the woman he ‘needed Associate 3, a non-United States citizen and recruiter of females for Jeffrey Epstein, to obtain a permanent United States residence so that she could remain in the country to work for him’.

Epstein offered her $20,000 and said he would pay for surgery she needed.

The lawsuit states: ‘The ceremony included not only signing the necessary legal paperwork prepared but also posing for photographs to give the appearance that the marriage was legitimate’.

Epstein offered the woman a place to live with her ‘bride’ but at the same time forced her to continue having sex with him.

After the marriage went through Epstein only paid the woman $10,000 and said the second installment would be paid once the marriage ended, the lawsuit states.

The source added: ‘She is a very sincere, kind, decent person, who was there absolutely not because of money, who was madly in love with him, and I hope she will be okay. She is a very kind girl who (became) depressed.

‘She was always next to him.’

The source said that she was involved in his partially-itinerant lifestyle, moving between his private island in the Virgin Islands, his ranch in New Mexico, and – less frequently – his palatial Manhattan townhouse.

He lived ‘by the season in different places – in summer the two of them, Epstein and Karyna, lived on his ranch in New Mexico,’ the source said.

‘Epstein himself spent less and less time in New York. ‘It seems that after prison he expected society to revive him and it did not work.

‘So, more and more often he spent time on the island. He came to New York for medical purposes, to see the dentist, for example.

‘Karyna was a dentist but never really worked in her profession. ‘It seems she could only do simple procedures as a dentist.

‘I’m not sure that she ever treated anyone including Epstein.’

Epstein, the source said, told people he felt isolated and worried when Virginia Giiffre Roberts, who alleges that she was his and Ghislaine’s longtime victim and forced to have sex with Britain’s Prince Andrew, began to sue him.

‘Everyone turned away from him after prison. People were afraid of him and the guests stopped coming,’ the source said.

‘Epstein even told me that he hired PR managers to improve his reputation.

‘He became very nervous in 2015 when Virginia opened a new criminal case.’

In January 2016 Shuliak was seen – but not at the time identified – wearing a white puffer jacket outside his $75 million New York mansion.

In another set of photographs from June 2016 she was seen coming and going from the property with some of Epstein’s inner circle, including longtime associate Susan Hamblin.

In the course of their time together, Epstein showed kindness to the Belarusian woman’s mother when she became ill.

‘He saved her life,’ said the source. ‘He crippled many lives, but I appreciate him for that. She wouldn’t have survived otherwise.

‘First he brought her mom over for diagnostics, then he helped in doing her documents and in transporting her over here.

‘There were several trips that she made. She was diagnosed and treated in New York.’

Her parents live in an upscale block with BMWs, Porsches and Mercedes parked nearby, and sources say their quality of life has markedly improved since Karyna was a child.

Her mother, asked by DailyMail.com about her daughter’s long term relationship with the convicted child sex abuser and trafficker – said: ‘So what?’ before abruptly ending the conversation.  Her father claimed not to be related to her.

Shuliak studied dentistry in Belarus – a country known as the last dictatorship in Europe – before enrolling in Columbia.

Her former class teacher at High School Number 2 in Minsk remembers a ‘humble and well-mannered’ girl who was involved in ballroom and sports dancing at a ‘palace of culture’ linked to the local tractor factory.

‘She was shy and laconic, and had pleasant radiant smile,’ said Tatyana Sagal. 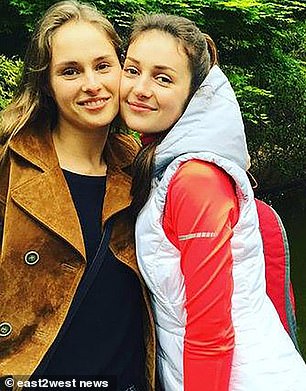 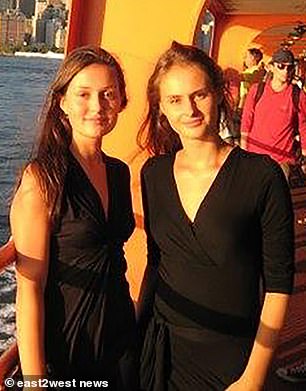 Pilipyonok and Shuliak traveled together to America. Pilipyonok declined to answer questions when reached by DailyMail.com. ‘I don’t have the time or the wish to talk,’ she said 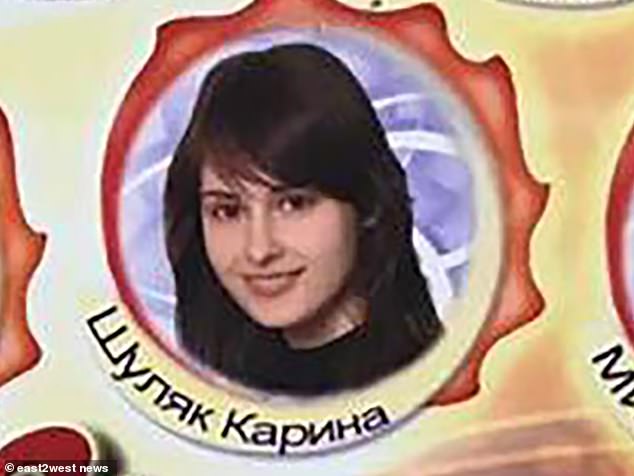 Her former class teacher at High School Number 2 in Minsk remembers a ‘humble and well-mannered’ girl who was involved in ballroom and sports dancing at a ‘palace of culture’ linked to the local tractor factory. Pictured in her graduation photo

After Epstein’s death, Shuliak was ‘depressed’ and her friends were ‘worried’ about her because she was in a ‘very complicated situation,’ the source said

A former friend in Belarus, Kristina Kostenko, recalls how Shuliak first went to the U.S. on a work and travel program.

Shuliak’s ‘best friend’ from Belarus, dentist Pilipyonok, who she traveled with to America, declined to answer questions when reached by DailyMail.com. ‘I don’t have the time or the wish to talk,’ she said.

Sources said that Shuliak has returned to the U.S.

‘She lives in the past so far and hopes for his will,’ said the source who has spoken to Karyna since Epstein’s death.

It is believed that she owns her own flat in New York, paid for by Epstein, unlike other women from Eastern European countries with whom he associated.

‘It’s hard for me to imagine the size of her savings,’ said the source. ‘I’m sure that Epstein would never give her a million dollars.

‘I think there is enough to cover her living expenses. Well, enough for a year or two. ‘I don’t know for how long it will last. She burns cash.’