There have been three new local cases of COVID-19 recorded in WA but none are believed to have been infectious in the community.

One case was linked to the Delta variant “backpacker cluster” and the other two were household contacts of returned interstate travellers.

The new cases take the total number of active cases in the state to 89, more than half of whom are being managed via home quarantine.

WA Premier Mark McGowan said some Commonwealth supplies of vaccines had not arrived before 5 to 11-year-olds became eligible for the vaccine today.

“Which is disappointing this far into the pandemic after assurances were made,” he said.

Mr McGowan said WA received 33,700 doses on Friday and expected to receive that number every week.

“But we will provide some of the doses where we can to GPs and pharmacies which have not yet received the doses they were expecting from the Commonwealth.

“We know that many parents will want to take their children to GPs like they do for other childhood immunisations, but I want to assure all parents that our state clinics in Perth and across regional WA are there and available to be used.”

Mr McGowan said 13,399 bookings to receive the vaccine had been made between tomorrow and January 24.

He said there were a further 5,000 appointments available over the next two weeks.

Seven-year-old John Usher, who got his first COVID-19 jab at the state-run vaccination clinic in Claremont today, said he was happy he received the vaccine.

His father Brian Usher said he had been worried about the state borders opening when kids hadn’t had a chance to receive two doses of the vaccination.

“I think [the government] should delay opening up,” he said.

“Give kids a chance, [they make up] nearly 10 per cent of the population.

“I don’t want to sort of panic, but if there is a sign that kids have COVID at school, I’m inclined to bring him home and home-school him for a while [to] keep him safe.”

Mr Usher said he thought it would be wise to push out the date in light of what was happening on the east coast.

“WA has done fantastically well at keeping the virus under control, but if they stick to the plan to open up on the 5th [of February], I fear for what’s going to happen at the schools…and of course what happens to the kids and the parents.

Concern over unvaccinated children in schools

Lucy Hopkins said she was grateful her children, five-year-old Neve and eight-year-old Ziva, were able to receive the vaccine as many children did not have access to it.

She said she was worried about her children mixing with unvaccinated children at school.

“When you look over east especially, with the Omicron variant, I think it’s a high chance of it spreading like wildfire,” she said.

“All we can do is protect our own kids and everyone makes their own decision.”

Lisa Seaburne-May said she was really pleased her kids had received the vaccine.

“It’s the first step in getting back to normal and of course I want the kids to be healthy and fit and well, ideally before they go back to school,” she said.

“We are pretty lucky to get in on the first day. The more kids that are vaccinated the better.”

Rapid Antigen Tests were also legalised in Western Australia today, but few retailers have any supply of the devices.

WA has ordered several million but Mr McGowan said the Commonwealth was not providing WA with its fair share of federal stocks.

RATs are legal in WA 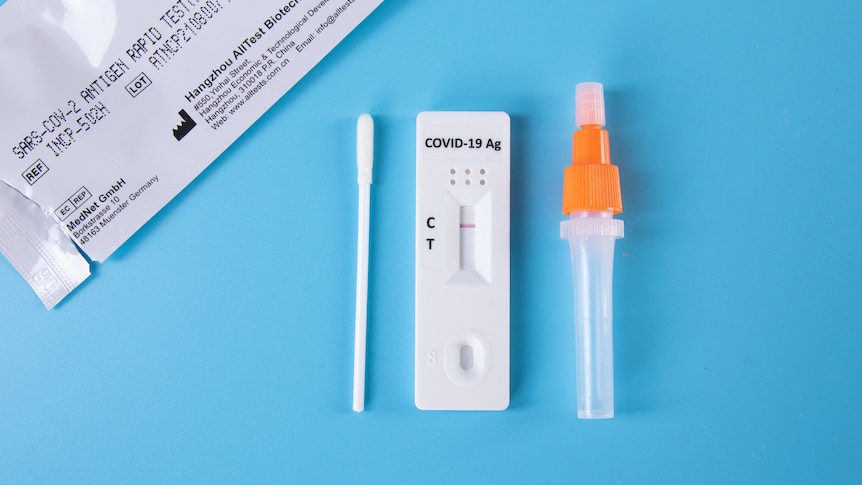 West Australians hoping to buy rapid antigen tests from their local pharmacies have been warned they will not be able to, due to a lack of supply.

“The Commonwealth has made available 10 million RAT tests to the states and territories but they’re not providing any to Western Australia, we’re the one state that is not getting any,” he said.

“I’ve written to the Prime Minister to ask for our share of RAT tests, it seems to me it’s not fair that Western Australia doesn’t get any from the Commonwealth.

“I expect the reason they will say is other states have huge outbreaks of COVID, but we never know what is around the corner.”

Mr McGowan said WA should not be punished for not having COVID and should be entitled to 1.2 million of the Commonwealth’s 10 million RAT tests on a per-capita basis.

A spokesman for the Prime Minister’s office said the Commonwealth had been supplementing stocks of RAT tests to states and territories where those tests were approved.

Previously, a breach of the prohibition on using RAT tests for COVID-19 in WA carried a fine of up to $20,000.

“That has changed today and the Commonwealth will assess what support will be provided.”

The spokesman also said enough vaccines to cover all West Australians in the 5 to 11-year-old age group were due to arrive this month.

“More than 82,500 doses of vaccines for 5 to 11-year-olds have already been delivered to Western Australian GPs, pharmacies and state clinics,” he said.

“With the remainder due this month to cover all 240,000 West Australian children in that age group.”

Mr McGowan said West Australians should try to get some tests before February 5, but warned against panic buying or using the tests prematurely.

“You just don’t want people to go and buy hundreds of them and other people not be able to get them,” he said.

“And you also don’t want people just going and using them, there’s no need to a use a RAT test now, we don’t have spread of COVID.

“And if you’re unwell go and get a PCR test at one of our clinics, they’re sitting there, they’re free, they’re available as we speak.”

Proof of vax app to launch as mandate expanded

The new app will include a check in feature while also enabling people to provide proof of vaccination.

WA recently introduced a COVID-19 vaccination requirement for venues with a capacity of 500 people or more.

How do mRNA vaccines work? Pfizer and Moderna’s COVID-19 vaccines are based on an as-yet unapproved technology. So beyond this pandemic, how might these and similar vaccines protect us against other diseases?

And Mr McGowan said that would soon be expanded.

“I also want West Australians to understand the current proof of vaccination requirements will be expanded further in coming days,” he said.

“We are currently finalising a longer-term policy which will cover a wide range of licensed events and venues, restaurants, as well as riskier environments like indoor fitness centres.”

“This policy will come into force as we move closer to easing border controls.”

But the Premier urged people to get their booster shot as soon as possible with WA sitting on a 14.5 per cent third dose vaccination rate for people aged 16 and older.

What you need to know about coronavirus: