A TikTok teen’s self-deprecating revelation that other people see what the iPhone camera does when they look at her has struck a chord among social media users.

British student Ruby Blackman, 16, took to the video platform to declare how startled she was that people see the ‘flipped’ version of her face – i.e. the image that displays when you capture your picture on iPhone’s selfie mode.

In the somewhat satirical clip, set to sad music, she said: ‘I just found out something mortifying; that every single person that sees me every day sees this. It’s just plain rude that nobody told me. Just… why wouldn’t you tell me this is what you have to see? I just wouldn’t leave the house’.

Shocked: TikTok user Ruby Blackman’s clip about realizing that people see the ‘flipped’ version of her face – unlike what she sees, above – went viral as it seemed to shock others too

In the short 18-second video, Ruby flips her face to illustrate her point.

When others got word of this as the video spread to Twitter and Instagram, they seemed equally as shocked.

‘Here I am thinking I’m gorgeous and people are seeing the flipped version of my face irl,’ questioned one person.

Someone joked that they’ve had ‘severe self esteem issues’ since they found this out for themselves.

‘Same. My nose is crooked the way people see me while completely straight [in the] mirror,’ echoed one person.

‘Sis same I look like I’m having a stroke,’ said another.

‘It’s funny that a lot of people didn’t know about this. When you look in a mirror it’s a reflection! Not a point of view. Take a picture and flip it and that’s how you truly look,’ an Instagram user pointed out when the video made its way to a popular meme page. 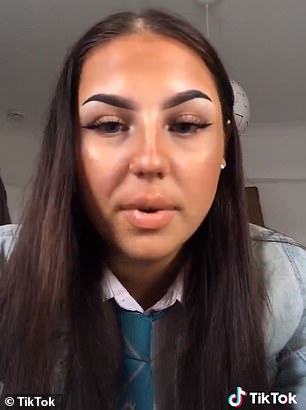 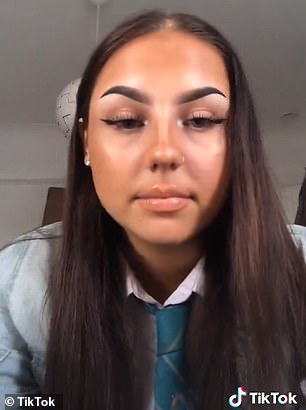 Flip side: To prove her point, Ruby flipped her reflection half way through the video from what she sees, left, to the opposite view, right, and joked to viewers, ‘Why wouldn’t you tell me?’ 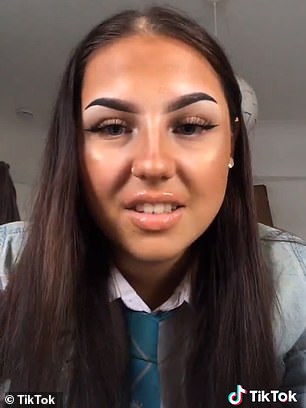 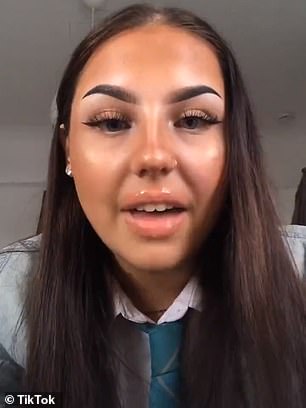 Difference: The only major difference when Ruby changed between her mirror reflection, left, to the ‘flipped’ version, right, seemed to be that her hair was tucked behind the opposite ear

On TikTok, where Ruby runs a popular account, the video has been watched 185,000 times.

And on Twitter, the video racked up over 76,000 likes when shared by another British teen.

Among the thousands of comments, internet users are tagging their friends asking them, ‘Why didn’t you tell me this?’

Many people pointed out that the difference the viewer sees in Ruby is so minuscule.

‘I also feel this but notice how when she flips it she doesn’t look any different to us. We only notice on ourselves… I still stress about it though,’ one person said.

‘Yea you feel it more when it’s you. But to others it looks normal. Weird,’ added another.

Reactions: Thousands of teens weighed in with their own thoughts about Ruby’s revelation that others see your face as the iPhone camera does

Photographer Kim Ayres explained in The Observer that ’90 per cent of people will say they hate having their photo taken’ because they are ‘used to seeing their face’ as it appears in the mirror.

He wrote: ‘We have spent our lives seeing our faces in the mirror, and we have become used to seeing our face that way round. So when we reverse that image, it doesn’t look right.’ 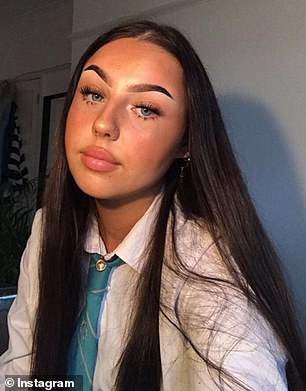 Star: Ruby, pictured, has amassed 67,000 followers on TikTok thanks to her makeup tutorial videos

‘Most people smile slightly more out of one side of their mouth than the other. Most people have a mole, scar or facial feature on one side and not the other. And so it goes on.’

‘When you add all these things together, when you see your face in reverse to how you expect it to be, it’s you, but not you.

‘And that makes you feel uncomfortable; because most of us are more far more comfortable with what’s familiar,’ he concludes.

The fact that most people ‘aren’t comfortable’ with the reflection of the ‘flipped image’ seemed apparent in the responses to Ruby’s video.

‘This is why I hate my life,’ deadpanned one female social media user.

‘Literally where all my insecurities come from,’ said another.

‘I ain’t ever going outside again,’ added another user.