By Sophie Tanno For Mailonline

A group of students at the University of Manchester are calling for a statue of Indian independence figure Mahatma Gandhi to be scrapped due to his ‘well-documented anti-black racism’ and ‘complicity in the British Empire’s actions in Africa’.

The 9ft statue is set to be unveiled outside Manchester Cathedral on November 25th and is intended to promote peace in the city following the Manchester Arena terror attack in May 2017, which killed 22 people.

It was donated to the city by the Shrimad Rajchandra Mission Dharampur, a spiritual mission based in Gandhi’s ancestral homeland of Gujarat, to ‘spread a message of peace, love and harmony.’

Mahatma Gandhi is remembered across the globe for his non-violent campaign for Indian independence and was nominated five times for the Nobel Peace Prize.

A statue of the iconic leader of India’s independence movement is set to be unveiled outside Manchester Cathedral on November 25th. Student activists at the University of Manchester are calling for the statue to be scrapped based on his ‘well-documented anti-black racism’ and ‘complicity in the British Empire’s actions in Africa’

But in an open letter to the Manchester City Council, university students have demanded the Council reconsider its decision, citing Ghandi as a ‘fellow colonist’ and referencing the hashtag ‘#GandhiMustFall’, which was previously used during similar efforts to remove a statue at the University of Ghana.

The letter reads: ‘Gandhi referred to Africans as “savages”, “half-heathen Natives”, “uncivilised”, “dirty” and “like animals”.’

‘He saw himself as a ‘fellow-colonist’, theorising Indians as a superior race, which he called ‘indo-aryan’ in explicit reference to white supremacist logic.’

The letter states that Ghandi is used as a political figure to justify current human rights abuses under Modi, and argues the Indian government is ‘engaging in an effort to erect Ghandi statues globally to create an image of India as an anti-imperialist state.’

The letter demanded that the university ‘refuse to be complicit in this, especially given the city’s history of anti-racist action, and to stand in solidarity with Manchester’s Black and Kashmiri communities.’

One of the authors of the letter, Union Liberation and Access Officer Sara Khan told student union paper The Mancunion that black history month was an especially important time to be shedding a light on Ghandi’s ‘anti-black racism’ and confront the ‘terrible injustices black people have faced and continue to face across the world.’

Ms Khan explained her stance on Twitter, saying: ‘Erecting a statue of Gandhi will only promote his racist & anti-black ideology, & legitimise continued violence in Kashmir.’

Shrimad Rajchandra Mission Dharampur defended the planned erection of the statue, saying: ‘This call is an extreme and limited interpretation of Gandhi, whose heroism united Indians, South Africans and Americans in their liberation movements. 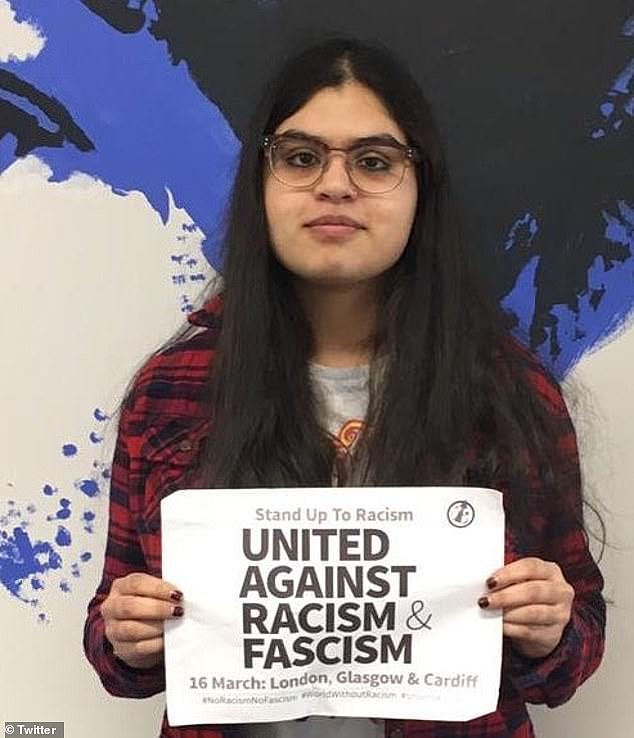 One of the authors of the letter, Union Liberation and Access Officer Sara Khan (pictured) told student union paper The Mancunion that black history month was an especially important time to be shedding a light on Ghandi’s ‘anti-black racism’ and confront the ‘terrible injustices black people have faced and continue to face across the world’

‘Mahatma Gandhi is a citizen of the world and an icon of peace. The Manchester statue will celebrate the universal power of his message.’

Ms Khan made headlines in March for demanding articles by the Manchester university student-run newspaper be vetted by a ‘sensitivity reader’ and stating the publication should ask people for their permission to be reported on.

She explained that being written about could ‘result in psychological distress, and puts people at risk of being harassed, especially women, who are particularly targeted with death and rape threats through social media.’

Ms Khan also called for the student newspaper to implement a 45 per cent quota of journalists and staff to come from black, Asian and minority ethnic background to reflect the student population.

She last year led a vote that banned clapping at the university, saying that the noise could cause issues with to those with autism, sensory issues or deafness.

Manchester City Council was not immediately available for comment.